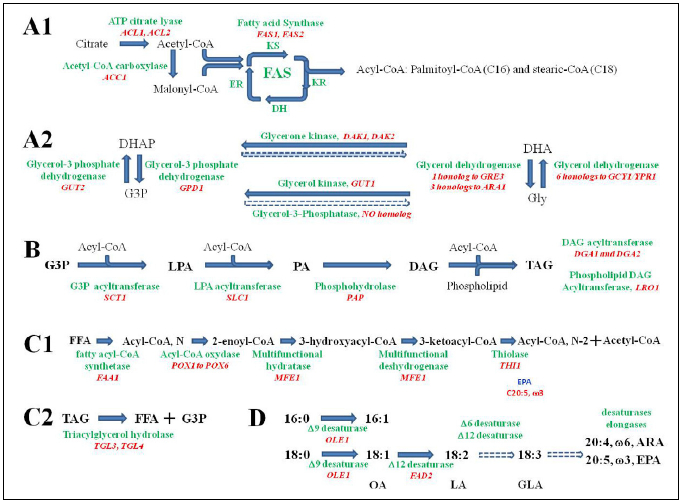 Pathways targeted by metabolic engineering for triglyceride production in yeast. (A) The synthesis of the acyl-CoA precursor (A1) start with the production of citrate from the TCA cycle, secreted from the mitochondria, which is then converted to acetyl-CoA by the ATP citrate lyase (ACL1 and ACL2). Part of the acetyl-CoA is converted to malonyl-CoA by the acetyl-CoA carboxylase (ACC1). Synthesis of fatty acids (Acyl-CoA, mainly palmitoyl-CoA and stearic-CoA) is catalyzed, through elongation cycles, by the fatty acid synthase (FAS1 and FAS2) consisting of four successive reactions by the ketoacyl synthase (KS domain), further modified at the β-carbon position by ketoacyl reductase (KR), dehydratase (DH) and the enoyl reductase (ER) from the basic blocks acetyl-CoA and malonyl-CoA. (A2) The synthesis of the glycerol-3-phosphate (G3P) been part of the “gycerol pathway” that regulate the concentration of the glycerol (Gly), glycerol-3-Phosphate (G3P), dihydroxyacetone phosphate (DHAP) and dihydroxyacetone (DHA). Dihydroxyacetone phosphate (DHAP) is converted to glycerol-3-phosphate (G3P), by the NAD+-dependent G3P dehydrogenases (GPD1) and the reverse reaction G3P, in the mitochondria, is converted to DHAP by the mitochondrial FAD+-dependent G3P dehydrogenase (GUT2). Catabolism of glycerol depends on two pathways: (i) the “DHA pathway” in which glycerol is converted in dihydroxyacetone (DHA) by glycerol dehydrogenases (GCY1/YPR1, ARA1 and GRE3). DHA is then phosphorylated to DHAP by the glycerone kinases (DAK1 and DAK2) and (ii) the “G3P pathway” in which glycerol can be phosphorylated into G3P, by the glycerol kinase (GUT1). In Y. lipolytica, they are an expansion of honolog genes coding for glycerol dehydrogenase and the absence of homolog to the glycerol-3 phosphatase (GPP1 and GPP2 in Sacharomyces cerevisiae). (B) To boost the TAG synthesis pathway. In Y. lipolytica, triacylglycerol (TAG) synthesis follows the Kennedy pathway. FFA are activated to coenzyme A (acyl-CoA) and used for the acylation of the glycerol-3-P backbone to synthesize TAG. In the first step of TAG assembly, G3P is acylated by G3P acyltransferase (SCT1) to lysophosphatidic acid (LPA), which is then further acylated by LPA acyltransferase (SLC1) to phosphatidic acid (PA). This is followed by dephosphorylation of PA by PA phosphohydrolase (PAP) to release diacylglycerol (DAG). In the final step, DAG is acylated either by DAG acyltransferase (DGA1 and DGA2 with acyl-CoA as an acyl donor) or by phospholipid DAG acyltransferase (LRO1 with glycerophospholipids as an acyl donor) to produce TAG. (C) To block the degradation pathways; the beta-oxidation (C1) and the TAG remobilization (C2). Free fatty acids (FFA) are activated by fatty acyl-CoA synthetase. The activated acyl-CoA (of N carbon) enter the beta-oxidation corresponding to four reaction catalyzed by the acyl-CoA oxidases (POX1 to POX6) then by the multifunctional enzyme having both the hydratase and the deshydrogenase activity (MFE1) and finally the thiolase realizing an acyl-CoA (of N-2 carbon) and an acetyl-CoA. TAG remobilization could be blocked by inactivation of the triacylglycerol lipases (TGL3 and TGL4).